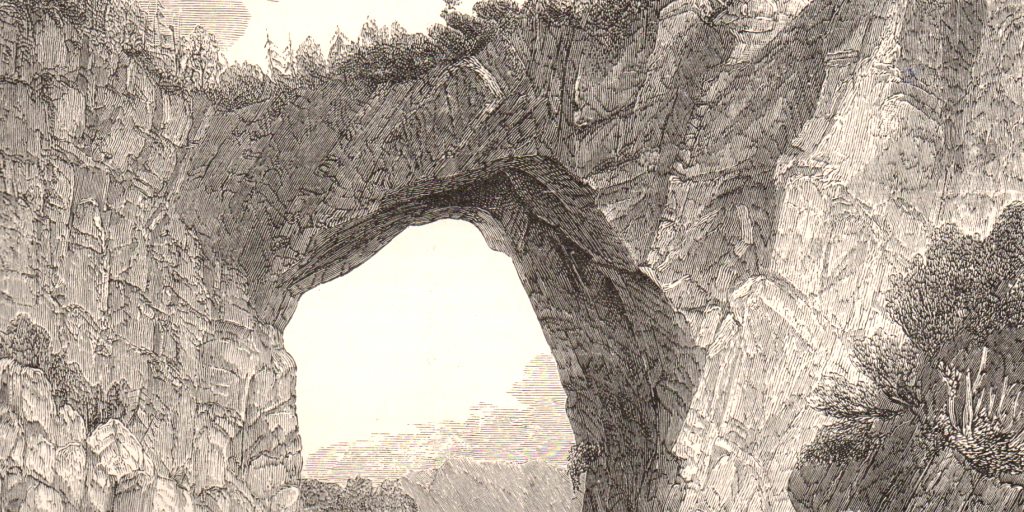 Before there was the Grand Canyon or the Great Smoky Mountains, before Yellowstone or Yosemite, even before the famous falls of Niagara that attracted crowds of 19-century tourists, Americans boasted of the Natural Bridge. Now the famous rock arch in Rockbridge County, Virginia, has entered the National Park Service orbit of treasured sites. Secretary of Interior Sally Jewell has designated the picturesque geological formation as “an Affiliated Area of the National Park Service (NPS),” according to an NPS press release. Although the Park Service neither owns nor administers such areas, it recognizes Natural Bridge as a place of national significance.

Natural bridge may be America’s first natural feature promoted as a tourist destination. Thomas Jefferson acquired the property in 1774, and it makes an appearance in his book Notes on the State of Virginia. His description pivots from Jefferson’s tendency for scientific objectivity to his more romantic bent. He begins by characterizing the natural bridge as “the most sublime of Nature’s works,” and then proceeds with the details of its measurements and constitution. But he cannot resist returning to the sublime power of this natural wonder:

If the view from the top be painful and intolerable, that from below is delightful in an equal extreme.  It is impossible for the emotions arising from the sublime, to be felt beyond what they are here: so beautiful an arch, so elevated, so light, and springing as it were up to heaven, the rapture of the spectator is really indescribable!

In a similar way, Jefferson describes Virginia’s mountain scenery in romantic terms. “It is as placid and delightful,” Jefferson avers,

as that is wild and tremendous.  For the mountain being cloven asunder, she presents to your eye, through the cleft, a small catch of smooth blue horizon, at an infinite distance in the plain country, inviting you, as it were, from the riot and tumult roaring around, to pass through the breach and participate of the calm below.

This scene of calm and wildness, Jefferson tells his European readers, “is worth a voyage across the Atlantic.” He then goes on to relate this mountain view to the natural bridge. He describes both as “monuments of a war between rivers and mountains, which must have shaken the earth itself to its center.”

A Precedent for National Parks at Natural Bridge

Notes on the State of Virginia displays Thomas Jefferson’s enthusiasm for the sublime sights of his Virginia homeland. This may be the earliest American attempt at promoting natural attractions as tourist destinations. In this regard, Jefferson anticipated what would become our collective love of national parks.

It’s not clear if any European readers took up his recommendation to cross the Atlantic to view the Natural Bridge or the scenic vistas of Virginia’s mountains. But the idea that such sublime experiences were worth a long, expensive, and sometimes dangerous voyage would become a common theme at later travelers’ destinations. The first to gain international acclaim would be Niagara Falls. Later Yosemite, then Yellowstone, the Grand Canyon. Virtually the entire system of national parks would become “worth a voyage across the Atlantic.” And now, although it remains a Virginia state park, that first treasure of the American landscape has a new status. Secretary Jewell has made Natural Bridge an affiliate member of National Park Service sites. ♨